Biodiversity in Bosnia and Herzegovina

Bosnia and Herzegovina (BiH) has a particularly rich biological and habitat diversity, due to the ecological heterogeneity of space, geomorphologic and hydrological diversity, specific geological past and climate diversity. It is located in three distinct geological and climatic regions: the Mediterranean region, the Euro Siberian-Bore American region and the Alpine – Nordic region. It is home to a number of endemic species and habitats, and the location of relic centers – refuges of tertiary flora and fauna preserved today under specific paleo-climatic conditions.

The country is one of the countries in Europe with the greatest diversity of plant and animal species. BiH flora and fauna is characterized by a high degree of endemic and relict life forms. More than 5.000 species and subspecies of vascular plants, more than 100 species of fish and more than 320 species of birds and other elements of biological diversity have been identified in BiH (BiH Fourth National Report to UN Convention on Biological Diversity, 2010). As much as 30% of the total endemic flora in the Balkans is contained within the flora of BiH. The area of Herzegovina is particularly significant because of its transition from a Mediterranean region into a highland mountainous region, which represents a very rich area in terms of plant diversity (Vukmir et al., 2009). 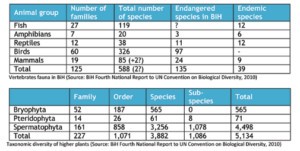 Refugio – relict habitats represent the most unique element of BiH’s environment. These habitats were the least altered during the period between pre – and post – glaciation and have preserved their natural ecological qualities. They contain many tertiary plant and animal species which were subject to drastic climate changes during the last glaciation period. Species living in these refugia are considered to be relicts. These types of habitat, where numerous tertiary relict species of plants and animals live, are of the greatest importance for BiH’s biodiversity, as well as for global biodiversity. Tertiary relict ecosystems in BiH are located mainly in canyons, cliffs and on the steep slopes of mountains in the basins of the Una, Vrbas, Bosna, Drina and Neretva rivers (Vukmir et al., 2009).

Richness of landscape diversity in BiH can be best explained by geographical zones, which provide prerequisites for different ecosystems and landscapes. Predominant landscapes from the south to the north are as follows (BiH Fourth National Report to UN Convention on Biological Diversity, 2010):

BiH is considered rich in genetic diversity of its domestic species that have obtained special genetic attributes as a result of adaptation to local environment and specific conditions. High diversity of genetic resources in BiH is also reflected in the great number of original animal breeds and plant sorts.

The Red Data Book for BiH has still not been developed and adopted. However, a list of plant species was prepared by Dr. Cedomil Silic for the National RDB during the recent war, following a request of BiH Ecological Society in 1990. This work has been published in the Gazette of the Museum of Natural History in Sarajevo (p. 31 (1992-1995): 323-367 (1996)). 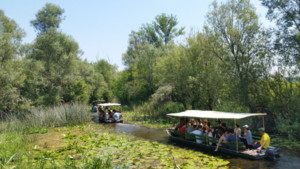 Based on the information of Plant Europa, it is considered that BiH hosts 64 globally threatened species in total – Extinct: 1; Endangered: 0; Vulnerable: 3; Rare: 59; Indeterminate: 2.

This Sliding Bar can be switched on or off in theme options, and can take any widget you throw at it or even fill it with your custom HTML Code. Its perfect for grabbing the attention of your viewers. Choose between 1, 2, 3 or 4 columns, set the background color, widget divider color, activate transparency, a top border or fully disable it on desktop and mobile.

Sign-up to get the latest news and update information. Don't worry, we won't send spam!