Among various events on the 13th conference of parties to the United Nations Convention on Biological Diversity (UNCBD COP13), held in Cancun, Mexico, competing with all 195 members of the Convention Bosnia and Herzegovina received an award for the best newly established Clearing-House Mechanism, by the decision of the special jury formed by the Secretariat of the UNCBD. 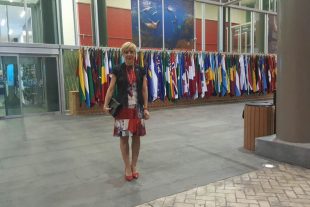 CHM of Bosnia and Herzegovina is presented on a special website, with a platform that contains important information, data, strategic plans, national reports, legislature and other documents of BiH which are relevant and related to the entire portfolio of the Convention on biodiversity and its protocols. CHM plays an important role in the implementation of the Convention and its Strategic plan for biodiversity (2010-2020) through the exchange of information, data, experiences, scientific achievements and other relevant contents, with operational and interactive networking of all member countries and various partners.

After the President of Mexico, his Excellence Enrique Pena Nieto, opened the COP13 on Monday 5 December 2016, various both official and unofficial meetings related to the UN Convention on Biological Diversity, Protocol on Biosafety (so-called Cartagena Protocol) and Protocol on access to genetic resources and fair and equitable benefits arising from their utilization (so-called Nagoya Protocol) have been taking place. Bosnia and Herzegovina is a full member of the Convention of Biodiversity and Cartagena Protocol. Bosnia and Herzegovina is represented by an accredited delegation headed by Ms Edita Đapo, Minister of the Federal Ministry of Environment and Tourism, who took part in the ministerial meeting of the parties and round table discussion on biodiversity and tourism, as one of the panellists.

Members of the Delegation of Bosnia and Herzegovina who participate in the work under the integral program of the conference include Mr. Muhamed Cero, assistant minister in the Federal Ministry of Environment and Tourism and national focal point of Bosnia and Herzegovina for the Convention, Prof. Senka Barudanović, member of the Bureau of the Conference of the parties to the Convention and Prof. Vjekoslav Trkulja, who participates in the part related to the 8th meeting of the parties of the Cartagena Protocol which discusses enhancement of capacities for establishment and efficient utilization of a portal for exchange of information on biodiversity (Biosafety Clearing Mechanism – BCH). Two countries are candidates to host the next COP14: Egypt (Sharm El Sheik) and Turkey (Istanbul). In order to avoid the need that accredited representatives of the parties of COP13 vote on this issue, the CBD Secretariat, with the mediation of the host country Mexico, proposed that the next 14th COP meeting should take place in Egypt, while the 15th meeting will take place in Turkey, which will most likely be confirmed by a consensus by the end of the Conference.

About the Author: admin

This Sliding Bar can be switched on or off in theme options, and can take any widget you throw at it or even fill it with your custom HTML Code. Its perfect for grabbing the attention of your viewers. Choose between 1, 2, 3 or 4 columns, set the background color, widget divider color, activate transparency, a top border or fully disable it on desktop and mobile.

Sign-up to get the latest news and update information. Don't worry, we won't send spam!